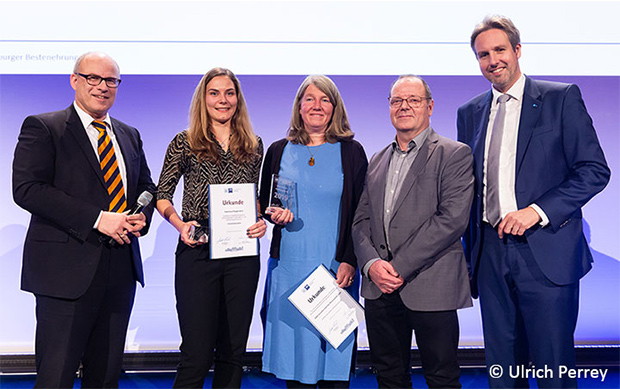 GBA Wins Award for Being a “Highly Attractive Employer”

As part of the investigation titled “Germany’s Best Employers,” conducted by the German newspaper DIE WELT, in August GBA Gesellschaft für Bioanalytik was listed as one of 442 companies that are highly attractive places to work.

This award is based on a nationwide survey of more than 600,000 German citizens carried out by a Cologne-based analytical institute called ServiceValue GmbH in cooperation with DIE WELT. A total of 1,333 companies were put to the test.

Whether or not a company was listed depended on the ratio between the number of employees in the company and the size of the region (at least 100 employees in the smallest regions, at least 500 in the largest regions). The evaluation was differentiated between whether the company was known on a regional basis or a nationwide scale. Whereas companies that are known worldwide or nationwide, or at least represented at several locations, were assessed on a national scale, other companies that are mainly known locally were just assessed within their own region.

The focus was placed on the image and the attractiveness of the company as an employer. The image tells about the general atmosphere of the individual company and the attractiveness means the company’s appeal as a potential employer. The people who were surveyed were able to present their opinions on a scale of 1 (excellent) to 5 (poor). A scientifically credible, independent attestation to the quality was provided as a result of the unweighted mean value of all answers. The award “highly attractive employer” was granted to the 442 companies that received above-average results (2.96 or better). Furthermore, 299 companies within this group were able to demonstrate exceptionally good results (2,82 or better) and thus received the distinction “very highly attractive employer.”

We are pleased to announce that GBA Gesellschaft für Bioanalytik can once again be found among this distinguished group! Now our next goal is to become a very highly attractive employer.